ALL HAIL THE KING 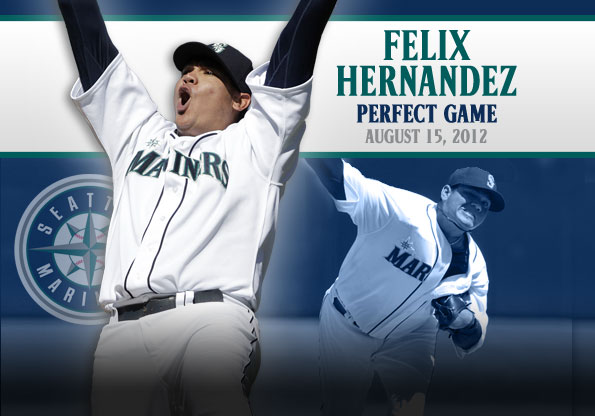 KING FELIX AND EL PRESIDENTE
From Elias: Venezuelan "King" Felix Hernandez became the second pitcher born outside the United States to throw a perfect game. Another "head of state", Dennis "El Presidente" Martinez, born in Nicaragua, retired all 27 batters he faced for the Expos at Dodger Stadium in 1991.

HE RAYS CAN'T ESCAPE PERFECTION
From Elias: The Tampa Bay Rays, in their 15th season in the majors, became the first franchise in major-league history to be on the losing end of three regular-season perfect games: Mark Buehrle in 2009, Dallas Braden in 2010 and Felix Hernandez in 2012. The Dodgers have been on the short side of perfect games by Tom Browning in 1988 and Dennis Martinez in 1991, plus Don Larsen's masterpiece in the 1956 World Series.

Joe Maddon, who was ejected in the seventh inning Wednesday, has been the Rays' manager in all three of their perfect-game losses. Only one other skipper in MLB history has seen his team go 27-up, 27-down more than once: Tommy Lasorda of the Dodgers (Browning & Martinez).

ANOTHER GEM AT SAFECO
From Elias: Safeco Field, the site of Philip Humber's perfecto in April, became the first stadium to host two perfect games in one season. In fact, the only other ballparks to witness perfection more than once in their history are Dodger Stadium (Sandy Koufax & Dennis Martinez), the stadium now known as O.co Coliseum in Oakland (Catfish Hunter & Dallas Braden), and the "old" Yankee Stadium (David Wells & David Cone in the regular season, plus Don Larsen in the World Series).

Torna a “I Topic delle Squadre”